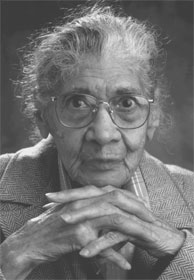 Nellie Stone Johnson had a long and distinguished record of public service in support of the advancement of minority concerns, the rights of workers, and equal opportunities for all people. Her life was a series of "firsts." As a leader of organized labor in the 1930s and 1940s, she was the first woman vice-president of the Minnesota Culinary Council and the first woman vice-president of Local 665 Hotel and Restaurant Employees Union. She was also the first black person elected to citywide office in Minneapolis when she won a seat on the Library Board in 1945.

Nellie Stone Johnson grew up with a strong tradition of support for education. Her mother and grandmother were teachers. Her father was a school board member in Dakota County. She left home at 17 to finish high school through the GED program at the University of Minnesota. After a number of years in the work force, Nellie continued her studies at the University of Wisconsin using the money she earned from trapping to finance her education there. Nellie's commitment to education continued through her work on the Minnesota Education Board. She also served on the Minnesota State University Board for eight years, and the Minnesota State Colleges and Universities Board of Trustees.

The Nellie Stone Johnson Scholarship Program provides financial assistance to racial minority union members and their families who wish to pursue an education at one of the colleges and universities of Minnesota State. The scholarship program was established by the former Minnesota State University System in 1989, as a part of the universities' cultural diversity initiative. MSUSA assisted in the administration of the program from 1997 to 2006. The scholarship program currently operates as an independent entity.

The program honors Nellie Stone Johnson, a long-time member of the system's board. The endowment is a permanent reminder of Nellie's contributions to civil rights, human rights, and the rights of work force cultural diversity initiative focuses on the recruitment, retention and graduation of greater numbers of students of color. Evidence has shown that the success of minority students in completing college is in direct correlation to the financial assistance that is available. Scholarships also reduce students' dependence on loans and debt burden. The Nellie Stone Johnson Scholarship Program's scholarship monies come from private sources, including alumni, labor unions, company foundations, friends and other supporters.

If you're a resident of New Zealand, you may be wondering whether Neteller casinos are a good choice. After all, these services allow players to make deposits and withdrawals instantly. And with Neteller casinos New Zealand your money is safe and secure. The following are the advantages of using this service. And what are the best sites to use it? Find out more below! Here are a few recommendations. Here are some of the best online casinos that accept Neteller. As one of the leading payment processors, Neteller supports over 50 payment options, including credit and debit cards. Most of these methods are safe and secure. Other deposit options include Visa, MasterCard, and Maestro, and they all charge 0.5% to 8%, depending on the bank. Using your bank's Neteller account to fund an online casino is easy and secure. To use it for your online gambling needs, all you need to do is link your accounts.

Evolution Gaming is among the live casino Australia in Australia. They are well-known globally for their great service and quality of games. Besides offering the best gaming experience in AU, these live casinos are also very safe. You can play Roulette for AU$5,000, or even more! If you're looking for a high-quality live casino, these are the ones for you. You'll find them in most top AU gambling websites. Another important element of live casinos in Australia is their variety of games. They range from video games to table games. Some of the best live casinos also have an excellent choice of entertainment. The majority of them are available in multiple languages and are available to players in AU, so they're sure to have an appealing casino for you. However, if you're looking for a casino that suits your taste, make sure to check out their diverse game offerings and their wide variety of options.